Guess What was in Bode’s Back? 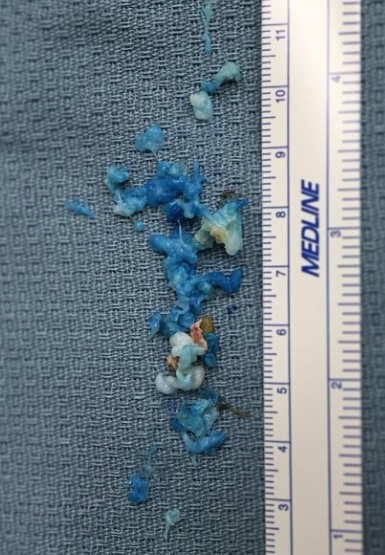 World-class skier Bode Miller attracted a bit of attention recently when the former U.S. Olympic downhill skier posted a picture to his Instagram account showing the material doctors removed from his back during an operation for a badly herniated disc (Note: The material was dyed blue by the medical staff for illustration purposes).

People who saw the picture were concerned by what appeared to be fragments of some sort of plastic-like debris; but in fact, what they saw was the gel-like material contained by the discs that separate your spine – after they had been attacked by the body’s immune system.

Here’s how it works: In a healthy spine, your discs are composed of a flexible outer membrane and a gel-like interior material designed to absorb shocks and help your spine remain flexible. When a disc becomes herniated, usually as a result of strain or trauma, the membrane rips or splits apart in a process called delamination, and some of that gel-like material leaks out.

In some cases, and especially when just a small amount leaks out, the body’s natural waste-removal system takes over, removing the material and disposing of it over time. But when a larger amount is extruded, it overwhelms the waste-disposal system and winds up on the immune system’s radar. In turn, the immune system attacks it, turning it into the rubbery-looking fragments shown in the picture and eventually walling it off from the surrounding tissues. The result: A knobby lump that presses on the nerves of the spine, causing symptoms including numbness and pain. At that point, surgery is necessary to remove the material and relieve the symptoms.

In many cases, a herniated disc will resolve on its own with therapy and proper management. Once a disc becomes delaminated, it can still function, but you may need some physical therapy to learn how to reduce the stress or load on your spine so you can avoid future injury.

One of the best ways to avoid herniated discs is to avoid overstressing your lower back by following the oft-repeated advice – lift with your legs.

If you’re having back pain, give us a call today at 800.890.1964 and have it evaluated as soon as possible so you can avoid further injury.