Dr. Richard Wohns shares about his big day in surgery in Nepal. 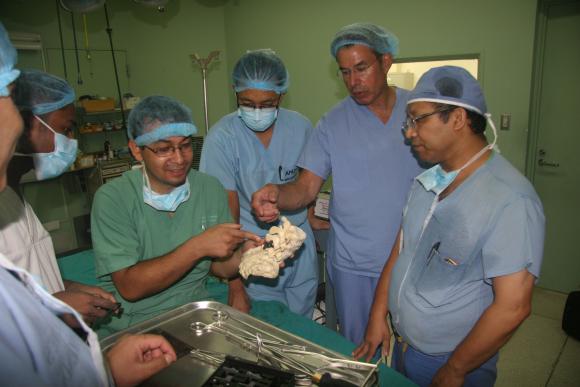 We had a very long day in surgery taking care of the patient who came up from the Terai (south of Nepal) two months after sustaining a fracture/disclocation of C4-5. There was a major kyphotic deformity plus left arm weakness. Initially the patient did not want surgery as he was walking and thought that he could live with the neck pain, but every time he took off his collar, he had more neck pain then started thinking he should see the excellent neurosurgeons at T.U. He brought a set sum of money with him to pay for his care, but when he heard he needed spinal fusion with implants, he was concerned that he couldn’t afford it. Thanks for the donated implants we have, Sushil discussed how the surgery would not lead to any implant related costs, then the patient agreed to proceed. We planned a 360 degree procedure, first with posterior decompression and reduction, then flipping the patient and performing a C4-5 ADF.

Surgery start time was 9am and we started by 10am, after setting everything thing up.  We were lucky to have the one fluoro unit available to us from around 11am for the rest of the day until we were done at 5pm. The posterior decompression was very complex due to fracture of the facet and lateral mass on the left, which had already started to fuse in a dislocated position since it was 2 months since the trauma. Sushil did a great job meticulously decompressing the left C5 root. We were both concerned about possible vertebral artery injury intra-operative given the abnormal anatomy. Although the posterior procedure went well, reduction could not be accomplished fully, given that fusion in the kyphosed, subluxed position had already begun to occur.  We then fused posterolaterally with biologic products.

At around 1pm, we flipped the patient and started the anterior procedure.  The fully disrupted disc and kyphosis/subluxation made the anterior procedure difficult also, but we obtained a perfect anterior decompression. This helped mobilize the segment somewhat.  We then sized the space for a PEEK cage, filled it with local bone graft and biologic and checked fluoro. The alignment was much improved and we were very pleased.  We then drilled down the anterior surface of C4 so that we could plate across C4-5, rather than have to do a corpectomy to get a plate to fit.  We also thought that we might be able to reduce further with the plate. Indeed success! We achieved an excellent reduction and realignment.

During the surgery, I was able to use four different implant companies’ products, and demonstrate the usage of another product.  The attending and resident neurosurgeons greatly enjoyed seeing and using the new implants.  Sushil really liked the drill that I brought, donated by one of our supportive companies: it worked perfectly.  Anthony scrubbed in on the anterior procedure and greatly enjoyed the experience.

The patient woke up nicely post-op and his pre-op neurologic deficit was completely relieved immediately.  We were all very pleased. We then drove back to the Shanker Hotel, picked up Marie and Thomas Steffen (who had just arrived), and went out to a Nepali dinner in the Thamel district with Sushil.

The following day, we did rounds, clinic, then I gave a lecture on outpatient spine surgery. This led to a wonderful discussion about the culture and other differences between the U.S. and Nepal. It was interesting to hear, and see in clinic, how patients come in “late in the game” and try to not undergo surgery.